The renowned author and whistleblower Evaggelos Vallianatos describes British environmentalist and campaigner Dr Rosemary Mason as a “defender of the natural world and public health.” I first came across her work a few years ago. It was in the form of an open letter she had sent to an official about the devastating environmental and human health impacts of glyphosate-based weed killers. What had impressed me was the document she had sent to accompany the letter. It was over 20 pages long and contained official data and referred to a plethora of scientific papers to support the case she was making.

For almost a decade, Rosemary Mason has been writing open letters and sending reports she has compiled to media outlets and prominent officials and agencies in the US, the UK and Europe to question their decisions and/or to inform them of the dangers of pesticides. She has been relentless in exposing conflicts of interest, fraudulent science and institutionalised corruption in regulatory processes surrounding glyphosate and other agrochemicals. Her quest has been fired by a passion to protect the natural world and the public but there is also a personal aspect: she is affected by a serious health condition which she attributes directly to the reckless use of pesticides in South Wales where she resides. And her assertion here is not based on idle speculation. In her reports, she has presented a great deal of evidence about the deterioration of the health of the British public and how agrochemicals play a major contributory role.

She recently sent me a report ‘How glyphosate-based herbicides poisoned our nature reserve and the world‘. It focuses on how she had set up a nature reserve in South Wales. What she and her husband (who has a professional background in conservation and nature) had achieved on that reserve was impressive. But thanks to the local council’s indiscriminate spraying of glyphosate-based herbicides, it was subsequently transformed from a piece of land teeming with flora and fauna into a barren wasteland.

What follows is an interview I conducted with Rosemary Mason about her nature reserve and her campaigning. We discussed her motivation, the support she has received and her feelings after almost a decade of campaigning.

Colin Todhunter: Have you always had a passion for the natural environment?

Rosemary Mason: I was born in the countryside during the war and my mother took us on walks and taught us about wildflowers, which was her passion. My brothers and I fished in the stream for minnows and sticklebacks and set nightlines for pike and chub (we never caught any). When I was a junior doctor, I became interested in bird watching and I am former chair of the West Area, Glamorgan Wildlife Trust. At that time, unlike today, farmland was full of lapwing, oystercatcher and redshank displaying and protecting their nests.

CT: Why did you decide to set up your nature reserve?

RM: In 2006, the Bumblebee Conservation Trust was launched in response to the massive declines in bumblebees, butterflies and insects in general, with the demise of traditional hedgerows, hay meadows, chalk grassland and wildflowers and the intensification of farming and the widening use of pesticides. At the same time, the UK’s Natural Environment Research Council perversely announced the closure of its wildlife research centres for ‘financial reasons’, a decision opposed by 99% of 1,327 stakeholders. Monks Wood centre, which hosted BBC’s Spring Watch, pioneered work on DDT and pesticides in the 1960s and more recently revealed how climate change is affecting wildlife, with spring arriving three weeks earlier. More significantly, the research centres were also involved in assessing the impacts of GM (genetically modified) crops on wildlife, with findings contradicting industry claims that no harm would be caused.

In response, in March 2006, my husband and I decided to establish our own small pesticide-free wildlife reserve after attending a joint meeting of the Welsh Ornithological Society and the British Trust for Ornithology in Aberystwyth.

CT: I have read your new report about your nature reserve. I would certainly encourage everyone to read it. It describes in some detail how you and your husband set about attracting an impressively wide array of bird, insect and plant species to the reserve, many of which had virtually disappeared from the British countryside, mainly as a result of intensive farming practices. What I found impressive is your knowledge of these species and how you were able to identify them. From the narrative provided (which at times reads almost like a novel) and the enthusiasm conveyed, you put in a lot of hard work developing the reserve and what you achieved there was impressive.

RM: In brief, it was a miracle. I think the next five years from 2006 were the most exciting and fulfilling of my life. At the end of 2009, I wrote an account of speckled bush crickets. Judith Marshall, working at the Natural History Museum, is a world expert on grasshoppers and bush crickets. She said it was the first monograph to be written on a single species.

CT: Can you say something about the demise of the nature reserve?

RM: We published a second photo-journal in 2010, ‘The year of the bumblebee: observations in a small nature reserve.’ But in 2011, I knew something was wrong. The moths were disappearing from the area and the orb web spider had gone from the hedge. We were aware that the local council was spraying glyphosate-based herbicides on Japanese knotweed in the valley below and close to our reserve. But we had to be sure.

In August 2013, we asked our then Welsh Assembly Member to request the council to stop spraying glyphosate-based herbicides on Japanese knotweed. The council said they would only stop if they were authorised by the Health and Safety Executive. So, I wrote to the HSE at the beginning of 2014 telling them about measuring increasing glyphosate levels in water and that we had had many cases of breast cancer in our area. They refused to do it because they said that glyphosate-based herbicides were still legal. I begged them to do it on several occasions, as we saw the biodiversity in our reserve plummeting. Finally, they said if I asked the same question again, they wouldn’t reply to me.

CT: You have engaged in a long struggle for many years, trying to get officials at local, national and European levels to act on pesticides. You have written many open letters to policy makers and key officials and have usually attached lengthy reports referring to data and scientific papers in support of your case. I think you began doing this in late 2010. Whose work have you taken inspiration from along the way?

RM: The work of Dr Henk Tennekes, the independent Dutch toxicologist, was a real eye opener for me. In 2010, he published a paper and wrote a book ‘The Systemic Insecticides: a disaster in the making’. It is about the loss of insects and insect-feeding birds in Europe, caused by neonicotinoid insecticides. The RSPB and the IUCN Charities refused to help fund the book because it ‘wasn’t scientific enough’. We subsequently discovered that Syngenta had funded neonicotinoid seeds for the RSPB Hope Farm Reserve. Systemic neonicotinoid insecticides are still on the market in the UK and the US nine years later.

I found Henk’s work to be shattering. It actually changed the course of my life. The fact was that he’d worked out that the effect on the brains of insects was irreversible, cumulative and there was no safe level of exposure. What was worse was that the Chemical Regulation Directorate didn’t seem to take it seriously. So, I wrote to Europe and the US EPA and the response was the same: ‘there is no evidence that the neonics are harmful to honeybees.’ Henk had written this book with amazing pictures and artwork showing the impact on insect-feeding birds throughout Europe. Humans had the same receptors; so, imagine the effects on humans if there are lots of neonics around. By March 2011, Henk and I decided that there would be a chemical apocalypse. So here we are, eight years later and bingo, our predictions were spot on!

Francisco Sanchez-Bayo, a toxicologist living in Australia, wrote papers with Henk agreeing that neonicotinoids insecticides irreversibly damaged the brains of insects and that levels built up over time. In 2019, he wrote a paper with a colleague in China, which proved that insect losses were global and due to pesticides.

Then there was the late Dr Maewan Ho of the former Institute of Science in Society who helped me to publish an article in the ISiS magazine in September 2014: ‘How Roundup poisoned my nature reserve’. She sadly died on 16 March 2016 from advanced cancer. She was an amazing woman and gave me much encouragement.

Finally, Polly Higgins, a Scottish barrister and environmentalist, gave up her practice and set up an organisation to end ecocide (destruction of the environment). Polly Higgins was an inspiration and campaigned tirelessly against ecocide. She died from cancer aged 50.

CT: Given all the open letters you have written to officials over the years, I cannot but feel you have by and large been stonewalled. Where does the buck stop?

RM: With David Cameron, the Health and Safety Executive and Defra (Department for Environment, Food & Rural Affairs) . A ‘Letter from America’ was sent from nearly 60 million US citizens warning Europe not to authorise GM crops and Roundup because of the disastrous effects on human health and biodiversity. Wales and Scotland took that advice. David Cameron received it on 11 November 2014, but he and Defra ignored it on behalf of England and kept it secret from the public. Cameron also appointed Michael Pragnell, Founder of Syngenta, to be Chairman of Cancer Research UK, which I’ve written about.

The HSE refused to ask the Council to stop spraying GBH on our reserve because it was ‘still legal’. The European Commission and the European Food Safety Authority ignored the Letter from America too and kept on authorising GM crops for feed and food in the EU.

Of course, there are many others who should be held responsible too, such as Bernhard Url, chief executive of EFSA, and the recently retired Chief Medical Officer for England, Dame Sally Davies.

CT: How do you feel about the destruction of your reserve, the pesticides issue, the state of nature and those officials who have effectively ignored much of what you have said to them? Disappointed? Frustrated?

RM: Those are such inadequate words to express my feelings. I am devastated about the global losses of biodiversity and I weep for our reserve. Sometimes, I dream that it is all reversible, but I know it is not. I read books about nature as ‘comfort food’. I feel sorry for the children who may never see a butterfly or a bumblebee. Indeed, I am a bit disappointed about the lack of support I have had from certain environmental groups and media outlets that report on environmental issues. I would like the mainstream media to acknowledge the role of the pesticides industry, but I don’t suppose they ever will.

However, I have gained some satisfaction from receiving expressions of gratitude and praise via the academia.edu site where my work is archived. And at least Jon Snow (Channel 4 broadcast journalist in the UK) has revealed the chief cause of losses of biodiversity to be poisoning the land, not global warming.

How do I feel? Maybe ‘resigned’ would be the right word to use.

• All of Rosemary Mason’s work can be accessed on the academia.edu website . 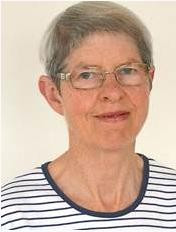