A worldwide catastrophe is underway among an extraordinary group of birds — the marathon migrants we know as shorebirds. Numbers of some species are falling so quickly that many biologists fear an imminent planet-wide wave of extinctions. These declines represent the No. 1 conservation crisis facing birds in the world today. No doubt you’ve seen some of these birds while on vacation at the beach, skittering back and forth along the cusp of waves as they peck with their long beaks for tiny sand flies or the eggs of horseshoe crabs. They can seem comic in their frenetic exertions, tiny Charlie Chaplins in bird suits. But these birds are remarkable in ways that defy not only belief but scientific understanding: They are, by far, the planet’s most extraordinary global travelers. Worldwide, about 70 shorebird species travel from the top of the world to its very bottom and back each year. The smallest weigh barely an ounce. Each species has its own story, but in every case these annual migrations are among nature’s most epic dramas.

Each spring, for instance, Hudsonian godwits (Limosa haemastica) depart from the southernmost coastlines of South America and fly north more than 9,000 miles to breed in the Arctic. Most make just one stop on the way — perhaps at a rice field in East Texas or a prairie wetland in South Dakota.

Outclassing Hudsonian godwits in long-distance travel are their close cousins, the bar-tailed godwits (Limosa lapponica). Weighing barely a pound, they have made the longest continuous flights ever recorded for a bird. Individuals tracked by satellite have traveled nonstop more than 7,000 miles, flying for nine days over the Pacific Ocean between Alaska and New Zealand. To do this, a godwit must eat voraciously before flight. By liftoff day, it will have doubled in size, half its body weight a gas tank of fat.

Migrating godwits fly continuously through dark of night, buffeting winds and swirling storms, guided only by neural capacities packed into a hazelnut-size brain. To navigate, they may rely on sun and star alignments, a sense of the earth’s magnetic field and perhaps even a map in their brain of the entire Pacific, with its far-flung tiny islands representing visual way points.

Another shorebird, the pectoral sandpiper (Calidris melanotos), departs from northern Alaska long before its offspring can fly, heading south to spend the winter in the pampas of Argentina. More amazing, the offspring left behind eventually take to the air on their own and, with no guidance, follow exactly the same route, joining their parents at a point 8,800 miles to the south. Scientists have no clue as to how this is programmed into the youngsters.

Some shorebird species are already gone. Overhunting in the late 1800s decimated the Western Hemisphere’s Eskimo curlew (Numenius borealis). Its counterpart in the Old World, the slender-billed curlew (Numenius tenuirostris), appears to have met the same fate a century later. Others are down to their last gasp. At least two dozen species that migrate from Alaska and Siberia to Australia and New Zealand are undergoing precipitous declines. The collective populations of 19 North American migratory shorebird species have fallen by more than 50 percent over the past 40 years.

The bottom line: Shorebirds are declining everywhere they exist, which is to say, all over the planet. 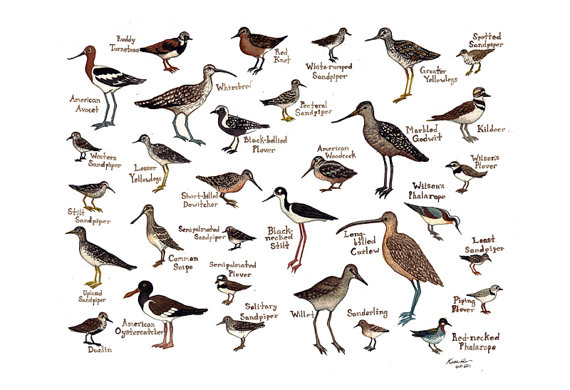