Factory farms are a threat to puffin numbers

A conservationist has called on the Scottish government to act to protect the much-loved puffin (Fratercula arctica) amid warnings that populations of the iconic bird are in terminal decline. Philip Lymbery, chief executive of Compassion in World Farming, points to a population crash of Scottish puffins due to overfishing in the North Sea. Lymbery argues that the commercial exploitation of sand eels — a cylindrical fish is are a crucial part of puffin chicks’ diets — has been driven by the rapid expansion of aquaculture, for which millions of tonnes of smaller fish are hoovered up and pulped as feed for farmed salmon. “Between two to five kilograms of wild fish are used to produce one kilogram of farmed fish. It’s a huge waste and completely unsustainable,” said Lymbery. “In Britain, I’ve seen puffins grasping bunches of small silvery thin fish in their beaks: sand eels. These little fish are rocket fuel for hungry puffin chicks, but they are in diminishing supply — and once again, industrial farming is in the frame.”

Lymbery raises the plight of puffins and other seabirds in his book Dead Zone: Where The Wild Things Were, published this week. He points to scientific research showing that between 1994 and 2003, about 880,000 tonnes of sand eels were “sucked” out of the North Sea. The effect on puffins and other seabirds has been devastating; on the Isle of May National Nature Reserve, home to the largest colony of puffins in the North Sea, numbers declined by 30% between 2003 and 2009. On Shetland’s Fair Isle, the puffin population has more than halved to 10,000 since 1986. Lymbery said the situation for Scottish puffins is “desperate” and questions why warnings made more than a decade ago have been ignored. In 2004, the RSPB warned that industrial fishing to supply fish meal had led to the most catastrophic breeding season on record for seabirds along UK coasts.

Lymbery is urging ministers to intervene with a “sustainable food and farm act” he hopes will reduce dependence on factory farming. He also wants consumers to dramatically reduce their consumption of factory farmed fish and meat. Trawlers harvesting sand eels to feed factory-farmed salmon deprive puffin chicks of an important component of their diets

“We are scooping up huge quantities of sand eels to feed farmed fish. The first thing we should do is pass a law that fish can only be caught for human consumption. The government needs to encourage a move away from intensive factory farming and consumers can help by avoiding farmed fish.”

Europe’s puffins are now classified as globally “endangered” by the International Union for Conservation of Nature Red List and are predicted to decline by nearly 80% by 2065. “In other words, when too many small fish are being hauled out of the sea,” said Lymbery. “The truth is that our wildlife is under multiple pressures and is increasingly being squeezed out of a world of ever-shrinking resources,” he continued.

Puffins, nicknamed “clowns of the sea”, are characterised by their colourful bill, with its splashes of orange and yellow. They are one of only a few birds capable of holding several fish in their bills at one time, thanks to their coarse tongues and a series of spines on their upper palates. They can gather, on average, about 10 sand eels on a single foraging trip. 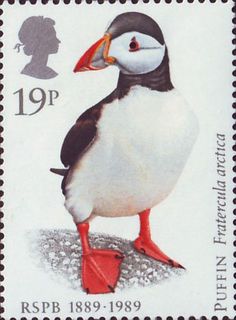