Fire salamanders (Salamandra salamandra) are captivating creatures, jet black with vibrant yellow patterns that vary from spots to stripes. One of the last surviving populations of this species is found in Bunderbos in the southern Netherlands. In 2010, when the salamanders here first began to die, herpetologists barely had time to react before sightings dropped from 200 to 4 in one year. By 2012, nearly 96% of all salamanders present when assessed in 1997 were gone. Although currently listed as Least Concern by the IUCN Red List, fire salamanders are threatened in many parts of their range across Europe. While they have suffered greatly from habitat loss through the drying up of streams, nothing decimated their populations like this mysterious disease. Fearing the worst, scientists captured 39 individuals to establish a breeding program, only for 19 animals (nearly half) to promptly die in captivity. Post-mortems were conducted on these animals, and they were tested for Bd and a host of other amphibian diseases, but to no avail. However, further experimentation by Martel and colleagues then revealed the presence of a fungal chytrid species called Bs, closely related to Bd but previously unknown to science. It is the only chytrid species, other than Bd, known to prey on invertebrates.

"The discovery of Batrachochytrium salamandrivorans (Bs) is very significant because it is a new species of a deadly amphibian pathogen and was undetectable using previous methods. Its discovery suggests that this, or other undescribed Batrachiochytrium species could be responsible for amphibian declines, but we have been missing them using current detection methods," explains Brian Gratwicke, a conservation biologist at the Smithsonian Zoo in charge of efforts to stem global declining amphibian populations.

Martel and colleagues have developed a sensitive DNA test for this new strain, which can detect Bs in swabs of the lesions of infected individuals. Remarkably, when Bs was used to infect midwife toads (which are the most sensitive of all European amphibian species to Bd), they did not contract the disease at all. Such variability lends hope that Bs will be restricted to the fire salamanders, but if it is anything like Bd, this could be wishful thinking. Martel strongly advises that all amphibian monitoring programs test for Bs, and other scientists agree.

"There are several unexplained declines of amphibians that have not been connected to Bd," Gratwicke told mongabay.com. "In one case, we are examining the effects of climate change as a possible factor explaining current declines of hellbenders and other salamanders in the Eastern United States. It would certainly be interesting to do some prospecting in this region for Bs and other Batrachochytrium species. Our pathologists have always advocated that we should continue to examine histopathology in enigmatic decline situations, rather than relying solely on swab results. This study is a great example of why we should always heed their advice."

The future of fire salamanders isn't entirely bleak. In 2000, the Smithsonian National Zoo pioneered a treatment for amphibians infected with Bd - a series of baths in the antifungal drug, itraconazole. Martel and colleagues have used a similar drug, voriconazole, to successfully treat fire salamanders with Bs infections. Although this cure exists, researchers have shown that surviving an infection of Bd does not render an amphibian immune to subsequent exposures to the same disease. Not only does this rule out a vaccine for the disease, but it also means the source of the fungus will have to be eradicated before reintroduction programs of the fire salamanders can begin.

Martel also reports that Bs survives at much lower temperatures than Bd, from 10 to 15 degrees Celsius, which suggests that tropical amphibian populations might not be at risk of encountering this new chytrid. In fact, heat has been suggested as a potential solution to Bd infections, since frogs with warmer body temperatures (from residing in warmer streams, or spending more time sunning) are less likely to become infected.

While it is tempting to think that a nice hot bath will save the fire salamanders, habitat destruction and climate change remain the largest killers of amphibians the world over. The present critical condition of nearly half of all amphibians worldwide is further threatened by chytrid fungal species, due to their ability to rapidly decimate amphibian populations already teetering on the brink of extinction. 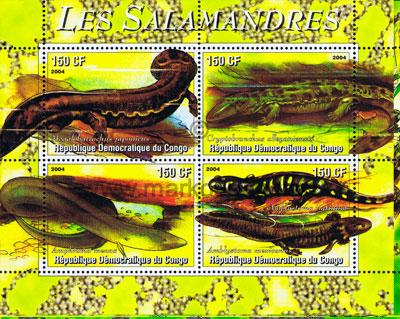