Early-life exposure to the herbicide atrazine makes frogs more susceptible to death from chytrid (Batrachochytrium dendrobatidis), a fungal disease implicated in amphibian declines across the globe. The research, Early-life exposure to a herbicide has enduring effects on pathogen-induced mortality, published in the Proceedings of the Royal Society B and led by University of South Florida (USF) biologist Jason Rohr, Ph.D, provides critical information for scientists hoping to stem the global demise of amphibian populations. “Understanding how stressors cause enduring health effects is important because these stressors might then be avoided or mitigated during formative developmental stages to prevent lasting increases in disease susceptibility,” Dr. Rohr explains.

Researchers exposed tadpoles to atrazine at levels found in the environment for a period of six days during the animal’s development, in combination with exposure to chytrid fungus (linked to worldwide amphibian decline), resulted in increased mortality 46 days later. According to the study, “[E]arly-life exposure to atrazine altered growth and development, which resulted in exposure to chytrid at more susceptible developmental stages and sizes, and reduced tolerance of infection, elevating mortality risk at an equivalent fungal burden to frogs unexposed to atrazine. Moreover, there was no evidence of recovery from atrazine exposure.”

“These findings are important because they suggest that amphibians might need to be exposed only to atrazine briefly as larvae for atrazine to cause persistent increases in their risk of chytrid-induced mortality,” said Dr. Rohr. “Our findings suggest that reducing early-life exposure of amphibians to atrazine could reduce lasting increases in the risk of mortality from a disease associated with worldwide amphibian declines.”

This research is the latest linking global species declines to pesticide-induced stress. In fact, there are many striking similarities between this research and studies on the decline of pollinator populations. Recent studies linking neonicotinoid pesticides to honey bee declines also put an emphasis on the impacts these chemicals have on immune system functioning. One study published in the journal Proceedings of the National Academy of Sciences, Neonicotinoid clothianidin adversely affects insect immunity and promotes replication of a viral pathogen in honey bees, shows that exposure to neonicotinoid pesticides results in increased levels of a particular protein in bees that inhibit a key molecule involved in immune response, making the insects more susceptible to attack by harmful viruses. A study entitled Chronic sublethal stress causes bee colony failure, published in the journal Ecology Letters, found that low-level exposure to the pesticide imidacloprid at levels bees encounter in the field causes subtle impacts on individual bees that eventually cause colonies to collapse.

Although atrazine alone did not result in higher frog mortality rates, earlier findings from Dr. Rohr consistently show the potential for the chemical to negatively affect frog biology by affecting their growth and immune and endocrine systems. A number of studies conducted by Tyrone Hayes, Ph.D., of the University of California Berkeley reveal that even minute doses of atrazine can induce hermaphroditism in male frogs, in effect “chemically castrating” the population. As discussed in Dr. Hayes’ article in Pesticides and You titled Protecting Life: From Research to Regulation, adapted from his speech at Beyond Pesticides’ 31st National Pesticide Forum, this “chemical castration” is not limited to amphibians, but has been repeated in fish, reptiles, birds, and mammals by other researchers studying atrazine. However, Dr. Hayes’ important work is at risk due to government cutbacks, industry attacks, and exceedingly high fees from the UC Berkeley’s Office of Laboratory Animal Care. In response, Beyond Pesticides has established The Fund for Independent Science to support Dr. Hayes’ work. Donations can be pledged to help raise the funds necessary to keep this critical research going forward.

Apart from atrazine, a number of other agricultural chemicals adversely impact frog populations. A 2012 study entitled New effects of Roundup on amphibians: Predators reduce herbicide mortality; herbicides induce antipredator morphology by Rick Relyea, PhD reveals that the widely used herbicide Roundup causes stress that results in the same morphological changes in frogs that would occur if the frog were exposed to a predator. Research published earlier this year, Terrestrial pesticide exposure of amphibians: An underestimated cause of global decline?, shows that the commonly used fungicide Headline (pyraclostrobin) and Captan Omya (captan) caused 100% mortality in the frogs tested when the products were applied at rates recommended by the label. Researcher Carsten Brühl, Ph.D. at the University of Koblenz-Landau in Germany calls the results “alarming” with the potential for “large-scale effects” on amphibians.

In his talk, Dr. Hayes explains, “If I didn’t have the lab data and the field data, you would never guess why these frog populations were disappearing. You would think it was disease. But in fact, pesticides and other stressors are playing an incredible role in terms of determining how susceptible the animals are to disease… Over 70% of all amphibian species are in decline. This is a group of animals that have been around since the days of the dinosaurs and we are losing species now faster than the dinosaurs disappeared from earth. This sixth mass extinction will be the first time that a mass extinction on earth will be caused by a single species.”

Dr. Rohr emphasizes prevention as an important way to interpret the results of this research and moderate amphibian declines. “Identifying which, when, and how stressors cause enduring effects on disease risk could facilitate disease prevention in wildlife and humans, an approach that is often more cost-effective and efficient than reactive medicine,” Dr. Rohr said.

Organic agriculture can play a role in reducing and eventually eliminating the load of synthetic pesticides in our environment, which, as evidenced, result in cascading complications to natural ecosystems and numerous externalities unable to be accounted for through the risk assessment process employed by the U.S. Environmental Protection Agency and other regulatory bodies. Support a healthy future for the planet and yourself by purchasing organic products whenever possible. For more information on amphibian declines and how to contribute to Dr. Hayes important work, see The Fund for Independent Science. See Beyond Pesticides’ program page for additional information on the benefits of organic agriculture.

All unattributed positions and opinions in this piece are those of Beyond Pesticides. 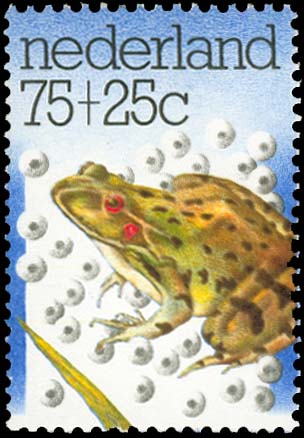